In days of yore (actually the early 1930s when I was a boy) my family lived in the country. We were almost self-supporting during the depression. We had a chicken farm (all free range, obviously), so had eggs and fowls to eat. We grew our own vegetables and fruit, preserving the surplus in one way or another to feed us through the winter months.

We had no electricity, so no refrigeration. Food was kept in a larder on the north side of the house near to the kitchen. Home-made gas gave us light in the dark evenings. It all sounds a bit primitive by today’s standards. But, except for being poor, we children were very content with our lot.

Our parents entertained with dances on our sprung drawing room floor in winter and tennis on a grass court in summer where, if any of us three children could find a weed, we were rewarded.

My father, having been badly wounded in the ‘14-’18 war, was somewhat of a health freak (which in fact killed him when trying radium, Madame Curie’s new invention). So fruit featured in our diet quite often.

For liquid sustenance, our guests were offered home-made lemonade. And memorable it was, being simple to make and delicious to drink. I make it to this day – more in summer than in winter.

The ingredients for this family lemonade were lemons (they were not waxed then) brown sugar (then known as pieces) and water. It is best made as an essence, and nowadays kept in a bottle in the refrigerator, to be diluted with water (which came ice cold from a well in those days), sparkling water, or even bought fizzy lemonade. Rum, vodka or other spirit will also turn it into something quite delicious.

Take four unwaxed lemons of a decent size. Halve them, and squeeze out the juice. Place this juice, pips and roughage in a bowl.

Cut up each lemon half into about three pieces and add these to the bowl.

Now add (for a sharpish essence) a table spoon of brown sugar.

I then press it all down in the bowl with a potato masher before and after adding most of a kettle full of boiling water. This releases some oils from the skin.

Allow the contents of the bowl to cool and, with a large funnel and sieve, strain the lemonade essence into a bottle – clear, plastic, glass, juice or water bottle will do.

Refrigerate this concentrate and use it diluted to taste with ice and what you will.

You will be drinking something pure and delicious – and with not an E-number involved.
Posted by . at 4:20 pm 1 comment:

If broad and climbing French beans were a bit of a disappointment, runner beans were a huge success. Since coming into fruition (if that’s the word), we have harvested a handful about every other day from some six plants grown in sacks of soil (sacks that had been useless for other vegetables). We have harvested the beans when still very young, before they formed stringy edges. We have eaten them either raw, or boiled for five minutes, dried in the saucepan, and then coated with melted butter, sea salt and garlic (an Argentinian garlic recommended for fish and salads). As an accompaniment to evening drinks in our garden or shed, the beans have been a delight. And searching for them among their foliage has also contributed to the start of the evenings’ pleasures.

Another delight obtained from these beans (Scarlet Runners) has been that their flowers have made a lovely addition to garden colour, and that their bright scarlet has attracted bees and bumblebees.

Next year I will construct a larger bamboo and string frame for them to spread over.

The tomato crop has been adequate, a crop that I think would have been larger had the plants not been partially shielded from the sun by runner beans.

The grape harvest was divided into two parts, with us going to Dieppe for a break in between. The result was 5 1/2 gallons of wine, one gallon of that being rosé. The sugar content of each harvest was around 15%. This was increased by the addition of sugar to make 22%. That will create just over 13% alcohol in the wine. The result of whether it has been a good vintage or not will be known shortly before Christmas when the bottling begins and the wine tasted.

From our “orchard” (one pear tree in a pot and an apple tree in a pot) we enjoyed some excellent fruit (and they looked nice, too). But a few pears were ruined for us, but not for a blue tit who acquired a taste for some when still unripe.

Summer background colour has been provided by our regulars of pelargoniums, impatiens, Bolivian begonias and roses (the Rev. P-R doing well for its age and weak vigour, and Typhoon spectacularly well – as always).

Our robins chose to nest elsewhere, but great tits brought up a family in our nest box.

There is something very satisfying about harvesting in late summer or autumn for winter consumption.

My son brought us damsons to turn into pulp and damson gin. My sister gave us apples and blackberries to be cooked down and then frozen for winter pies.

But our very own harvest, besides home-grown beans and tomatoes, has been our annual creating of wine from the vines in our small garden.

Ripening of grapes this year was a little uneven. So we harvested the ripest bunches of red Triomphe d’Alsace grapes on the 29th of August. Later we will vinify the later-to-ripen white grapes and the remaining bunches of Triomphe d’Alsace that will then be ready. Together these will be vinified to make rosé.

Two of us harvested five buckets of grapes, and de-stemmed them. Bunches of red grapes were stripped of their stems into two fermentation bins. The contents of the bins had sugar and yeast added, although the extra yeast was hardly necessary due to the bloom on the grape skins.

Fermentation started quickly and built up in vigour over three days.

It is necessary to keep forcing down the cap that rises to the surface during fermentation to prevent noxious moulds from forming on it. For the same reason, both inside and out of the bins have to be kept scrupulously clean.

Refusing to add sulphur to the wine (as more or less everyone else does) I rely on the alcohol produced as my preservative. So the higher alcohol content is contrived by the addition of a little more sugar than is normal.

Vinification takes place by ladling the fermenting must into a straining bag placed over a funnel in the demijohn. Some juice will run through the bag, and more after much squeezing and pummelling of the bag. Pips and skins are discarded, though in countries on the continent they might be turned into spirit.

There seems to have been a high proportion of pips and skins this year. So that five gallons of must produced only three and a half gallons of juice.

Because of the fear of bacterial contamination by not incorporating sulphur, I choose to strain the juice into the gallon demijohns when fermentation is still reasonably vigorous, hoping that nasties will not be able to invade the wine. This means that a certain amount of wine will issue forth from the gallon jars’ fermentation locks.

Then, when those locks have been changed regularly and washed clean, comes one of the joys of vinification. A regular stream of carbon dioxide bubbles plop forth from all the locks, making a noise rather like a chorus of croaking frogs. This lasts for as long as the yeast is turning sugar into alcohol. So the noise may continue when the demijohns are stored in the loft to be forgotten until shortly before Christmas. Then it is time to bottle the wine and see if 2010 has been a good year.
Posted by . at 10:53 am 1 comment: 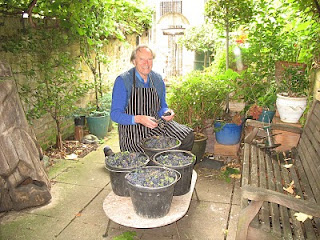 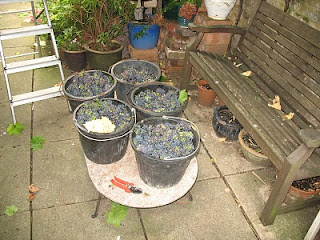 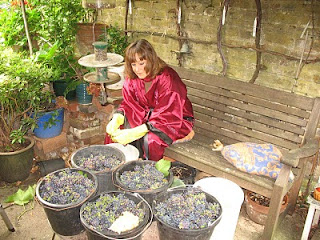 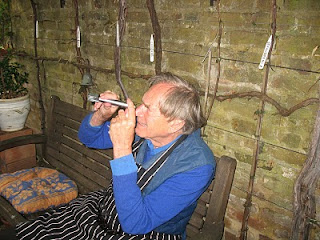 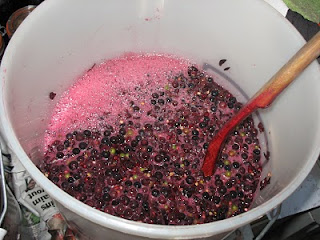 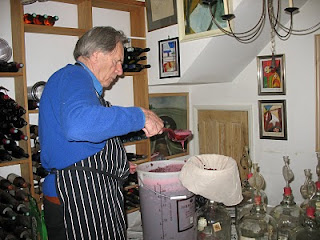 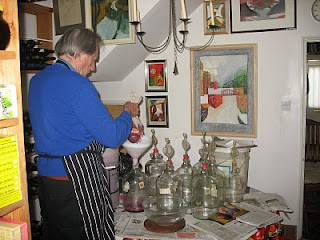 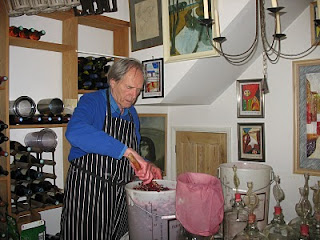