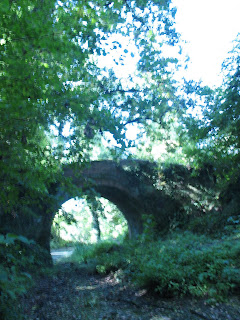 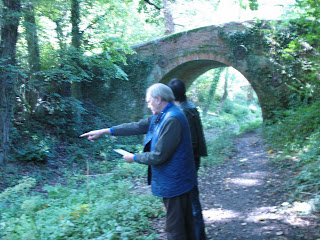 My son, Pete, is the owner of a 1954, 4’ x 2’ painting, by me, of an asymmetrical bridge over the Basingstoke Canal in Hampshire.
When I was painting landscape in those days I stayed in lodgings and scoured the country to find congenial subjects. Canals had always appealed to me. I can not recall what drew me to this particular bridge. But I set up my easel on the bank of the disused Basingstoke Canal on a day so cold that there was snow on the ground and ice on puddles where once had been deep water for barges – canal boats, incidentally, that were considerably wider than those in the rest of the country.
Pete had for a long time wanted to see the actual bridge. So I looked up its position on the old maps I had used at the time, and then new, only to discover that in the meantime the M3 motorway passed by, either very close to it or even over it. So it was with more hope than expectation that Pete, Margreet and I, with a photograph of the ’54 painting in hand, set out to find our bridge in October 2007.
Leave at junction 5, I told them, cross over the motorway, turn left, pass through a village called Nately Scures and take the first left.
That first left was a narrow country lane, leading to Up Nately.
We crossed over the motorway on a modern bridge and, looking down from it, could see no sign of canal workings. And then, there before us, was a narrowing of the lane with a hump back. We passed over it and looked down on to the canal – still unused and mostly dry, damp, or of stagnant water.
Parking the car in a space near to a red telephone box, we made our way back to the bridge and down to the old towpath via a very slippery set of crumbling steps.
And there it was in front of us – the red brick, asymmetrical bridge.
We walked beneath it to find the actual place where I had set up my easel in 1954, crossing the moist canal on foot and getting rather muddy in the process.
Practically nothing had changed. The tree in the left foreground had spread its branches and increased its girth. The canal was as dry, but now with puddles covered in duckweed instead of ice. And a sort of low sluice, installed presumably to hold back water to form a pond, had gone, manifesting itself as scattered, green lichen encrusted bricks.
I wanted to inspect the brickwork of the bridge. And the more I saw, the crazier the design became apparent.
The insides of the single arch were not straight, but deliberately bowed in shape. The brickwork where the bridge’s construction met the ground, splayed outwards. The apex of the arch on one side of the road was about 4’ to the side from the apex of the other. The parapets on either side of the roadway varied in height, so that at one place it was possible to lean on the brickwork and on another to trip over it. The coping bricks on the parapets were sometimes flat, sometimes rounded. The bricks were of differing colour and not always laid evenly. Because of the shape of the canal cutting, one side of the bridge was made with far more brickwork than the other. In fact, practically nothing about this bridge was as expected. It was asymmetrical and original in almost every aspect. The whole construction was a brilliant flight of fancy. And it was made during the construction of the canal between 1789 and 1794.
Who designed it? Who made it? Why had this part of the canal not been re-opened for recreational purposes like many of the others in the country?
There was a small house nearby, perched high above the cutting and shrouded in greenery. I took our photograph of the painting to show the occupants, who seemed unaware of this delightful construction almost beneath their doorstep. They kindly directed us to a pub a few miles down the road.
At the Fox and Goose, in very pretty Greywell village, we lunched off well-prepared country food and drank excellent beer. I asked the landlady if she knew much about the canal. She produced a short account of its history, written by a local.
Of the design or construction of the bridge there was no information. I like to think of a crowd of navvies who specialised in knocking up bridges out of their heads to suit the local conditions as they went along with their comrades digging out the canal.
The reason why the canal thereabouts has remained for so long untouched and part of nature’s blend in and around it, is that some of it passes through a tunnel 1230 yards long, called the Greywell Tunnel. And in this tunnel are bats – lots of them. It is thought that 10,000 might be wintering there. And bats must be looked after and protected.
What might the future hold for this charming and quite unspoilt small corner of late 18th century rural England? The bridge has stood the test of time, aided by iron ties and repaired brickwork (the original bricks came from a brickworks at Nately Scures a short distance away). A rent in the parapet on one side was disturbing. But as long as the bats continue to favour the Greywell Tunnel, then there is hope – for no change. Should the bridge ever be torn down (God forbid), at least, the image will remain for as long as that 1954 picture lasts.
Posted by . at 10:35 am 1 comment: