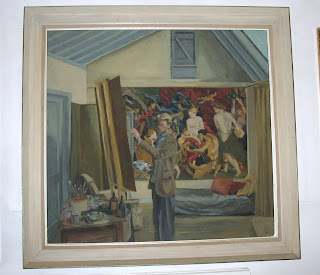 My art sale records show that in 1955 I sold a self-portrait to my cousin (who later became a Knight/Professor) for £15.
His son inherited the painting and, because of his rather smart collection of smaller pieces of importance, kept it, unseen, in his basement.
After my considerable success at Christie’s Salerooms, when a same-year painting of Chelsea Football ground sold astronomically well, my relation wanted to show the painting to me and, should it be marketable, to a Christie’s representative.
So the two of us appeared on my cousin’s doorstep, to be offered coffee and a tour of his art works – of which several paintings and drawings were of great interest to both of us.
We were then invited to descend to the basement. And there, outside its frame and leaning on a wall behind a bedstead, was a very large painting, done by me, of me, in my studio in the Fulham Road during the years 1954-1955.
I depicted myself standing at an easel, scruffily dressed, palette in hand, and peering at, presumably, a large mirror with, behind me, a mural of Rubens’s Peace and War (an exercise that was suggested to me by Dick Lee, a teacher at the Camberwell School of Art).
The Rubens I can recall painting clearly, but I still have no recollection whatsoever of having executed the self-portrait.
The Christie’s 20th century painting expert thought that now collectors were at my door again, it should be sold by me directly, and not through a saleroom. A sum of £2,000 was mooted.
My cousin then suggested that he give me the painting as a present – a most generous offer that was immediately and most gratefully accepted.
A minor problem appeared almost immediately. How was I to get it home? And yet another problem emerged. Where might I hang it in a small house with every bit of wall space covered with an eclectic collection of art works – 45 in the stairwell alone?
Christie’s man returned to his work. I was taken to lunch.
On my return to where the self-portrait stood waiting in a hallway, I hailed a taxi. Well, the painting only just got through the door of the cab, but not the frame, which I then had to recover after reaching home by immediately hiring a minicab with a roof rack on it.
The painting was now back with its original owner, and framed, but only just, as the board on which it had been painted had shrunk slightly during the 31 years of its existence. And in the lower left corner of it, a hole, the size of a human bite, had been the meal of a mouse.
There was really only one position in which to hang the self-portrait, and that was where a huge, glazed oil-on-paper painting of an Icknield Way landscape of pine trees on a ridge at sunset, held sway.
So what should I do with the old (only 31 years) picture to make way for the new acquisition (53 years old)?
At home we eat and entertain friends at a close-by Thai restaurant (The 101) that has almost become our second dining room – and it had wall space.
So I went to see the boss with a photograph of my proposed loan. He seemed to like the idea.
So my son, Pete, and I carried the very heavy painting around to the restaurant (with several stops for rest on the way) and hung it. The already eastern-looking subject looked just right for its new temporary home.
I backed the mouse hole and a slight break in the board with buckram and glue. Now, with hole filled and corner reinforced, it was just a matter of applying paint once more – the very same paint that I had ground myself, the same kind of medium, and using the very same brushes that had been used 53 years before.
I didn’t think too kindly of that long-dead mouse, but at least, in a mouse’s way, it had enjoyed my self-depiction.
Posted by . at 12:31 pm 2 comments: