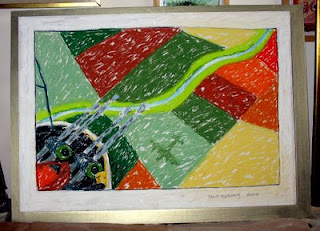 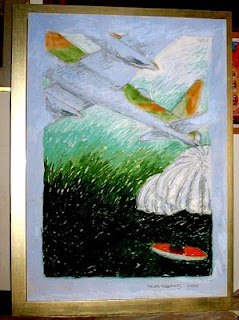 In winter, when the pheasant shooting season is in full swing, so many of the birds are shot that sometimes they cannot even be given away. And I have heard that unwanted carcasses are sometimes even buried, having provided the “guns” with their sport. It is then the time to buy several pheasants at a good price – often at a Farmers’ Market. At this time, pheasant becomes a reasonably-priced meat. Where I buy them, the birds are offered in prime condition, fresh from the shoot, plucked and trussed, and presented in cling film wrap.
Buy some, take them home, and slice off the breast meat and as much as you can cut from the thigh. The leg is very sinewy and best left untouched. Feel for shot in the meat and extract any (they are now usually No. 7 shot and very small), freeze the breast in pairs, and bag up and freeze the thigh meat for a future casserole or terrine.
Break up the carcasses and turn them into delicious game stock by putting them into a pressure cooker with some salt and pepper and just a little extra flavouring, like two cloves, two cardamoms and a bay leaf. Pressure cook for 45 minutes. Strain, and allow the stock to cool in a bowl before taking the fat off the surface with a spoon.
The stock is excellent if used as the liquid for a leek and potato soup.
When roasting the breast meat, wrap it in bacon.
When cooking breast meat with chopped up green cabbage, in which you have used your hands to coat the greens with olive oil, white wine, pepper and salt, place the meat just below the surface of the cut cabbage. Put peeled potatoes above and oven-cook for an hour or two.
Posted by . at 4:57 pm No comments: